MAY HOLIDAYS: Memorial Day – May 28 – A Time For Remembrance 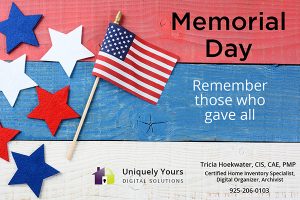 Memorial Day – May 28 A Time For Remembrance

For many, Memorial Day marks the beginning of summer. Across the country, families are getting together for picnics and barbecues, going boating on the lake or playing baseball in the park. Communities are coming together for parades and other festive celebrations. But let’s not forget the real reason why this day has been set aside as a national holiday.

Memorial Day is a day of remembrance for those who have died in service to our country. It is the time for us to reconnect with our nation’s history and our national values by honoring those who gave their lives for the ideals we cherish.

This tradition began more than 100 years ago following the end of the Civil War. After that terrible war, family members of the many Soldiers slain in battle would visit the gravesites of their fallen relatives or friends and decorate their graves with flowers. The first state to officially recognize the holiday was New York in 1873, and by 1890 it was recognized by all of the northern states. The tradition continued to change and evolve until 1971, when Memorial Day was declared a national holiday to be held every year on the last Monday of May.

Since 1775, when the first American Soldiers took up arms to fight for our independence, more than a million American service members have died in wars and conflicts to preserve the freedoms we hold so dear. They helped create the world we live in today, and paved the long road of democracy we continue to walk into the future. So today, we thank those who died to preserve our American way of life. We all owe them our freedom to live, to work and to raise our families.

Throughout the wars and conflicts this nation has fought, from our Revolutionary War to the Civil War; from the First and Second World Wars to conflicts in Korea, Vietnam, and Southwest Asia, each person lost has been important — cherished by family and friends; missed by comrades-in-arms who stood with that person. Behind every decorated grave today of a fallen Airman or Soldier is a story of grief that came to a spouse, a mother, a child, a family or a town.

But we’re not just here to mourn these heroes, we’re here to celebrate them and their sacrifices; their willingness to put service before self has protected the freedoms we enjoy. I encourage you to talk with some of their comrades who served during World War II, Vietnam, Korea or Southwest Asia. Listen to their stories, but realize there are many stories you will never hear.

Our Soldiers, Sailors, Airmen, Marines and Coast Guardsmen died to prevent tyranny from spreading to America’s shores and taking root. Many took their last breaths in the soggy rice paddies in Vietnam, on the cold, rugged Korean Peninsula or in the hot sun of the Iraqi desert. They’ve died bringing stability to regions of the world suffering under oppression, bringing a lasting security, enabling reconstruction and preventing the re-emergence of international terrorist organizations.

We can never repay our selfless heroes, but we can say thank you and honor and respect them for their service. They are all heroes. These men and women who came from varying backgrounds and diverse ethnicities, have kept America strong and protected our way of life for over two centuries, prosperity and justice for us all.

On Memorial Day, as we are enjoying the day and making plans for the summer – please take a few moments, and remember our brave men and women. Remember who they were, what they fought for and what they left behind for us. Remember the values they stood for and remember why they were willing to give up their lives for these United States of America. [SOURCE] Did You Know?

Each year on Memorial Day a national moment of remembrance takes place at 3:00 p.m. local time.