MAY HOLIDAYS: The History of Mother’s Day and More 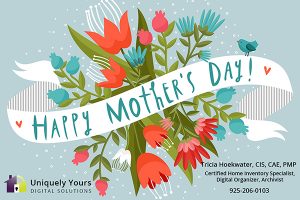 Celebrations of mothers and motherhood can be traced back to the ancient Greeks and Romans, who held festivals in honor of the mother goddesses Rhea and Cybele, but the clearest modern precedent for Mother’s Day is the early Christian festival known as “Mothering Sunday.”

Once a major tradition in the United Kingdom and parts of Europe, this celebration fell on the fourth Sunday in Lent and was originally seen as a time when the faithful would return to their “mother church”—the main church in the vicinity of their home—for a special service.

Over time the Mothering Sunday tradition shifted into a more secular holiday, and children would present their mothers with flowers and other tokens of appreciation. This custom eventually faded in popularity before merging with the American Mother’s Day in the 1930s and 1940s.

The American incarnation of Mother’s Day was created by Ann Reeves Jarvis of West Virginia in 1908.  On May 8, 1914, President Woodrow Wilson signed a proclamation designating the second Sunday in May Mother’s Day, and within a few years, the idea gained worldwide prominence.

In the years before the Civil War, Jarvis helped start “Mothers’ Day Work Clubs” to teach local women how to properly care for their children.  These clubs later became a unifying force in a region of the country still divided over the Civil War.

Jarvis would later denounce the holiday’s commercialization and spent the latter part of her life trying to remove it from the calendar.

While dates and celebrations vary, let’s honor the women who raised us—and all the mothers who sacrificed for their children.  Wishing all of you moms, grandmothers and caregivers a very Happy Mother’s Day.  We salute you!

For Mother’s Day, many children send greeting cards or make a special effort to visit their mothers.  Flowers or a planted container are a classic gift. Perhaps the most historically significant flower is the white carnation.  Orchids symbolize love, refinement, and beauty and are also a Chinese symbol for “many children.”  Lilies are also popular. The day lily is the Chinese symbol of motherhood.  Purple irises are also a special choice for mothers, symbolizing faith and hope.

Once upon a time, parents documented their kids’ firsts in words and pictures in baby books and scrapbooks that got updated as life’s big milestones got reached. Family photo albums grew thick with memories of trips, holidays, friends and relatives.

Today, who has time for that? Kids and their active lives, thousands of pictures and a bunch of well-meaning, half-finished photo book projects might be hidden away in closets, storage bins or worse yet, offsite storage locations.

For our parents and grandparents, it was easy enough to organize, assemble and pass along a handmade book that told the story of their children’s lives in photographs.  Today, the digital world has made that rite of passage and memories easier to retain but many have the old storage methods for their memories and memorabilia, which are space hogs, and being weathering with the passage of time.

Our memories create a bigger life.  We spend time and money trying to hold on to what we experience, afraid to let it go and be free.  We fill our homes with memorabilia and place all our faith that it will be as rewarding as the moment. But silently, the object steals away the most beautiful details and contains it to a shot glass or 4×6 piece of film paper or a figurine.

Things restrict our lives; memories expand it. Special mementos from a trip, special event or gift, can be difficult to part with.

To help retain the memories without the physical items, consider creating a digital library of those special mementos.  Well-taken photos can capture the item/image and be arranged into a variety of formats such as a coffee table book, a digital folder on your computer, a flash drive to plug into your television for a remembrance viewing or to send to a distant family member or friend.

Ready to move to a different format of memories?  We can help create a remembrance portfolio for you.  Contact me for ideas and action plan.

Definition: the state of bearing in mind; the ability to remember – memory; something that serves to keep in or bring to mind: reminder